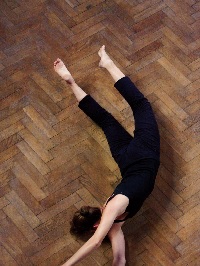 Saskia’s interest lies in the verges between different art forms, especially between dance, installation art and video. The bridge between the forms, how they interlink with each other, how they can be interpreted in the diverse art contexts and how they affect performers and audience, is her investigation focus. Saskia studied dance and choreography at the Laban Centre London (BA (hons) 2005). She also holds a Magister of Film and Theatre studies at the Freie Universität Berlin (2011). Right now she is continuing with her academic and artisic research as a member of the Graduiertenkolleg Sichtbarkeit und Sichtbarmachung at the Universität Potsdam. In addition to her stage work (kompanie zwischen) she has been working on films as choreographer and movement specialist. www.saskiaoidtmann.de