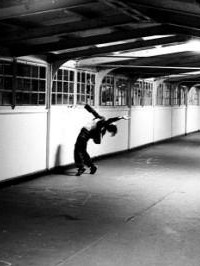 Irene Accardo graduated in 2003 in acting and pantomime in the international acting school “Permis de Conduire” in Rome. Her studies focused on physical theatre with among others Cathy Marchant (living theatre), Mylon Mela (Indian performing arts group) and Tapa Sudana (Balinese mask and movement master). In 2005 she completed her (bachelor) master in literature and philosophy at the 2nd University of Rome with a thesis on Tadeusz Kantor’s work in theatre and visual arts. A few months later she moved to Berlin where she started to work as performer in different projects and developed further her skills in physical theatre. In 2008 she founded her company “Theater machina”, where she developed her own trainings-method. From 2009 until 2011 she lived and studied in Hamburg where she graduated in the master in performance studies; she received classes from, among others, Tim Etchells, Jonathan Burrows, Milli Bitterli, Bojana Kunst, Silke Renners and Angela Guerrero. Her latest works focuses on the question of identity, heritage and storytelling. Alongside her performance projects she teaches voice and physical improvisation for performers.